EPOS Annual May Display - and the Misadventures of Orchid Photography

We managed to get to Port Elizabeth after all on the last weekend in May, when our "local" orchid society, EPOS, was having its Annual Display (see previous post). Sadly, although we had a few things in bloom (some paphiopedilums, a dendrobium and some cymbidiums), none of the OOAB menagerie made it down to be on display (they need to be dropped off during the week, and Port Elizabeth is a not inconsiderable distance away from OOAB HQ, about a 280km round trip; this doesn't mesh well with having a day job!).

Christo did a great job of displaying the plants members had brought in. There was a very tempting section of plant sales too, but we (somehow...) managed to resist the temptation, although a Paphiopedilum insigne very nearly persuaded us (it looks like Senior Management might have a weak spot for paphs, possibly because we can get them to bloom reliably and they aren't massive plants. Also, they're Paphs, and you can't argue with that).

Talking of Senior Management, she's decided the Big Camera is kind of fun to use, so the pictures below may be taken by either of us; pictures with an fine artistic sensibility are likely hers, or art directed by her, pictures that are of single flowers, boringly framed, are likely mine. It is great to have a partner that's also interested in photography (as Ron at Orchids in Bloom will attest); it makes hanging about taking endless photographs of things less awkward, and it's nice to have someone to share the results with too!

When pulling some camera gear out of my bag, someone asked me if I was "from the Newspaper" - I guess that's one of the perils of carting around a large DSLR with a big flash and fairly large looking lenses!

So, on to some photographs! As a "display" rather than a "show", there was no judging, and all the plants were integrated into displays.

First, some general pictures of the display (this doesn't capture everything on display - there were tons of plants in there!): 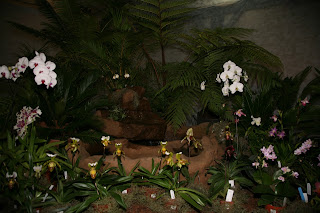 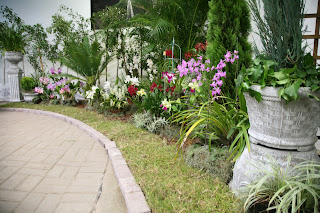 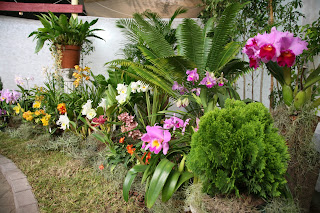 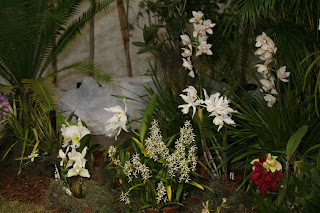 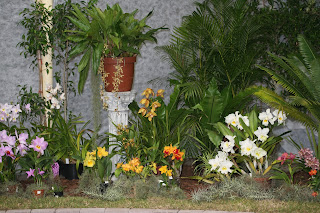 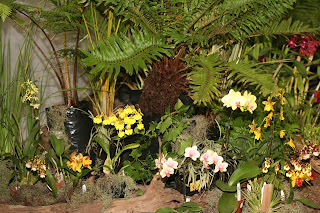 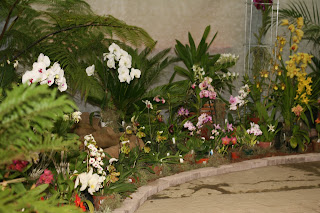 The lighting was a bit tricky; a mix of natural sunlight and fluorescent and quite dim. Small apertures, dim lighting and no tripod are not a great recipe for photographic success... I'm also not a huge fan of flash photography of large areas, nor high ISO settings, which generally compounds the challenge.

Next, we had some fun getting a little more up close and personal with the plants (being mindful not to damage anything with dangling camera straps, wayward toes, bags and flash cords etc). Not all the orchids are named as I couldn't always see or easily reach a label and I didn't want to unduly disturb all Christo's hard work or risk damaging anything; and of course some plants are inevitably NOIDs! I have also not looked any of them up to check if their names have changed in the Taxonomy Wars, so some of the names might not be up-to-the-minute.

Senior Management was quite taken with a little Phalaenopsis equestris tucked in next to masses of Laelia anceps:
This is what happens when you accidentally put the camera into timer mode and hand it to a neophyte photographer:
"Why is this camera so slow and hard to use?" quoth Senior Management. That said, this would have happened to me too if I was taking handheld macros with the timer turned on... Indeed, it's entirely possible one or more of those happened to me, because I distinctly remember going "hmm" and working it out quite fast after getting the camera back from a somewhat miffed Senior Management. After The Timer Incident, things went better... As always, feel free to click on an image to see a much bigger version of it (orchids usually repay a view of a larger version of the picture!).
If you look carefully at the stem above, you'll see it's twisted, showing that this is a resupinate flower, like many orchids. Resupinate flowers twist through 180º as they develop; in effect, the orchid flowers you're used to mostly grow "upside down" (if the lip is at the bottom, it's resupinate). If you think that's crazy, gastropod mollusks (snails) undergo torsion which is (to me) even crazier.

We hope you've enjoyed this brief visit (or re-visit if you made it to the display that day!) of the EPOS May Display 2013; I'm sure most of my readers are from even further away than I am, so I doubt many of you will have seen these first hand!
Posted by James Stapley at 12:50 AM